Friends Hospital, founded as 'The Asylum for Persons Deprived of the Use of Their Reason' by the Society of Friends in 1813. It is the United States' first private psychiatric hospital employed exclusively for the treatment of the mentally ill. It has been continuously operating since it first opened its doors, albeit in different buildings. Friends Hospital continues to enjoy a reputation as an excellent inpatient facility, and maintains renown in the national and international psychiatric community for the quality of care received, as well as various academic lectures held on site. In 2000, US News and World Report ranked Friends Hospital as one of the nation's top psychiatric hospitals, and in 2002 six of Friends Hospitals psychiatrists were named as being the region's "Top Doc's" by Philadelphia Magazine. 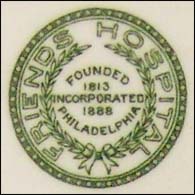 In the yearly meeting of the Society of Friends (Quakers) in Philadelphia in 1811, they mandated that a facility should be purchased and maintained for those members who had lost their sensibilities and proper judgment. Much like the Quaker York Retreat, asylum was sought in a country atmosphere. The location that was selected was, at the time, ten miles outside of the city of Philadelphia, and offered a peaceful rural refuge for those afflicted. The Quakers officially established their asylum in 1813, drawing on a belief that all persons could "moral, ordered existence if treated with kindness, dignity, and respect", despite disabilities. The influential Quaker minister, Thomas Scattergood, decried what he considered the harsh conditions faced by patients in mental asylums; Scattergood instead called for the "moral treatment" of patients, which was also advocated by Dr. Benjamin Rush, a physician at Pennsylvania Hospital. This model served as an inspiration for the establishment of the Friends Asylum for Persons Deprived of the Use of Their Reason.

The design and oversight of this project was undertaken by seven primary members: Thomas Scattergood, Emmor Kimber, Jonathan Evans, Thomas Wistar, Ellis Yarnall, Samuel Griffitts and Isaac Bonsall. These original members composed the original mission statement and charter of the asylum; and further divided their clinical intention into six primary points. In their own words they are as follows:

A 52-acre farm located in Frankford was allocated by the Society of Friends for the new asylum. $6,764 was paid for this lot, which was deemed an exceedingly large amount of money to be paid by a number of members of the committee. Six additional acres were added to this site shortly thereafter. Delegates were also selected from the committee to consult with the Quaker York Retreat in England, which was only founded two decades prior. The Friends Asylum opened its doors on May 15, 1817, and within the month had accepted two patients, of different sexes, for inpatient care. During the first year of operations nineteen patients were received, many of whom were deemed cured, and returned to their day-to-day life in Philadelphia.

To provide for the suitable accommodation of persons who are or may be deprived of the use of their reason and the maintenance of an asylum for their reception, which is intended to furnish, besides requisite medical aid, such tender, sympathetic attention as may soothe their agitated minds, and under the Divine Blessing, facilitate their recovery.

The original building, now known as the 'Scattergood Building' was designed to be North facing, and 322 feet high with a stone edifice. It was placed at considerable distance from the public road, which is now Roosevelt Blvd., some five hundred feet. Two wings, 100 feet long, flanking the front of the structure were completed on both sides. However, unlike Kirkbride's plans, they were not intended to discriminate between a clinical population. This building was made fellow to a small adjoining library, as well as a hospital garden, which was perceived as being crucial to the treatment of the insane in the 19th century.

The asylum was originally purposed for the care and treatment for members of the Society of Friends exclusively. However, with a change in Pennsylvania law, the Board of Managers put it to a vote and elected to remove the sectarian restrictions in 1834. Dr. Thomas Story Kirkbride, the father of American Psychiatry is record as having done his medical residency at Friends Asylum, before going on to found the Institute of the Pennsylvania Hospital in 1841.

As with many asylums, a superintendent's house was constructed on the campus in 1859, for the easy access of medical staff. Likewise, the steward's house was built nearby in 1910. These buildings, Lawnside and Greystone, were operational until recently, until they were re-purposed by the administration of Friends Hospital.

In 1871, extensive changes were made to the Scattergood building . $20,000 were secured from the Society of Friends for this reason. In this renovation a small bronze plaque was placed along the side of the building to commemorate its history. That plaque is still in place and recounts the founding of the hospital and its prominent Quaker origins. Additionally in this renovation, a mansard roof was placed over the top of the building, as well as a two story extension to the center of the building to accommodate more patients. Admissions to the hospital were temporarily suspended during construction. Another renovation and expansion took place in 1879, where the rear center of the building was fitted for a kitchen. The old kitchen was turned into a storage room and a bakery was constructed in the women's ward. By 1880 the Friends Asylum was able to hold 80 patients at one time.

Friends Hospital presented a number of innovations in the field. The staff introduced the use of pets for therapeutic recreation in 1830; and in 1889, Dr. Anna Elizabeth Broomall (1847-1931) was appointed at the hospital's first female physician. She was a close associate of Dr. Alice Bennett, the Superintendent of Norristown State Hospital's Women's Department. Like many asylums of the period, Friends opened a nursing school in 1894 for the education and certification of students who wished to learn the trade of psychiatric nursing. The first such graduating class was in 1896, of which two were men and four were women. The nursing school was exclusively advocated by Dr. Broomall, which was paralleled by a similar state program at Norristown.

Friends Hospital continued to expand through the early 20th century. In 1905, the Scattergood building was again expanded to accommodate more beds on the male ward. Additionally, reading rooms were constructed on both floor for the recreation of both sexes. This was followed by a modernization of the hospital's culinary department in 1906, as refrigeration and ice units were installed to meet the growing needs of the hospital. Five years latter, the asylum expanded its local property to a total of 100-acres. Friends Asylum also opened a satellite campus after 326 additional acres were aquired in Trevose, PA.

In 1922, the Hygeia Building was completed, which was originally designed to be used for hydrotherapy. It also housed a small natural science museum, as well as nurses' quarters. The hospital continued to expand with the construction of the Bonsall and Tuke Buildings in 1970, bringing the hospital to it's current capacity of 192-beds. The American Psychological Association further honored Friends Hospital by officially declaring it a training site in 1979. The Greystone program, a crisis residential (CRP) was established the year following for the treatment of low-acuity cases. 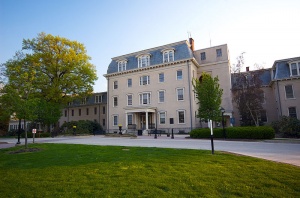 A leader in behavioral health care, Friends offers a system of comprehensive programs and services to people suffering from behavioral and emotional health problems. With 192 beds, Friends is the Delaware Valley's largest provider of inpatient behavioral health services, providing individualized programs for adolescents, adults, older adults and eating disorders. We have specialized programs for Women's Issues and Dual Diagnosis (mental health/substance abuse). Friends Hospital is accredited by the Joint Commission on Accreditation of Healthcare Organizations and licensed by the Commonwealth of Pennsylvania. Friends Hospital is currently owned by: United Healthcare Services, which also locally operated: Brooke Glen Hospital and the Horsham Clinic. Friends Hospital is contracted through the County of Philadelphia, as well as Community Behavioral Health, to accept 302 commitment petitions.

The many surviving historic buildings at Friends Hospital are sited on a large campus located off Roosevelt Boulevard just below Oxford Circle. Despite the growth of the city of Philadelphia, the campus represents a rural oasis in otherwise urban Northeast Philadelphia. Extensive historical landscaping, including renowned azalea gardens (open to the public), are also included in the "National Historic Landmark" designation of Friends Hospital.

Located on the grounds of the Friends Hospital, the Greystone Program is a long-term community residence designed to meet the special needs for individuals with severe and persistent mental illnesses. Consisting of two houses, Greystone House and Hillside House, the program is dedicated to helping its residents move toward recovery, greater independence, and an enhanced quality of life. The Greystone Program emphasizes the development of skills of daily living, socialization, purposeful activity, and recovery enables residents to realize their dignity, worth and highest individual potential. Many residents have chosen to make the Greystone Program their permanent home while other will successfully transition to a less structured environment.

Friends Hospital in the News[edit]