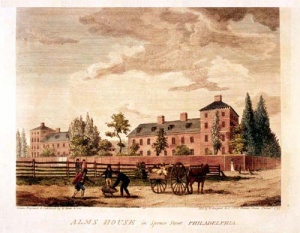 With the Friend's Almshouse operating since 1713 the city put off construction of it's own facilities until 1732, and the Philadelphia Almshouse was established. Occupying the entire block between Third and Fourth, Spruce and Pine Streets this was the first government funded poorhouse in the United States and was regarded as a model institution, it had separate facilities for the indigent and the insane, and also an infirmary. In 1767, the much larger alms house with an infirmary, and the house of workhouse were completed on the south side of Spruce Street between Tenth and Eleventh. This facility was used until around 1835.

By 1830, overcrowding necessitated further expansion, and a new alms house for men and another for women, a separate hospital and a workhouse were built from 1827 to 1832. This included departments for children as well as a colored department. This complex was built across the Schuylkill River in Blockley Township, in what is now University City in West Philadelphia. William Strickland was the architect and Samuel Sloan, later to be a well-known architect, worked as journeyman carpenter on the project. This facility soon became known as "Old Bockley". Operated by a city committee known as the Guardians of the Poor, Blockley’s early reputation for care was dismal. In 1864, the "Female Lunatic Asylum" building was accidentally destroyed by workers installing heaters, killing 18 women and injuring another 20. Article on Fire By 1885 there had been four fires at the institution. Blockley's geographical isolation from city medical institutions limited clinical care until the University of Pennsylvania, with its medical school, moved to a new site just north of the Almshouse grounds in 1871.

Despite the huge size of the institution for its time, with the ability to accommodate about 3,000, by 1870 it was overcrowded with a population of 3,789. According to the 1878 Annual report of the Board of Commissioners of Public Charities Blockley's Insane department housed 1,200, accounting for a full quarter of all insane in the state. In order to address this overcrowding at Blockley the state built the State Asylum for the Insane at Norristown, opening in 1880 (See Norristown State Hospital). In 1884 the State Luncay Commission ordered all insane in the state almshouses be transfered to their districts respective hospital. Despite this many insane remained at Blockley simply due to lack of accomidations at Norristown. In 1889 this was amended to allow for transfer of some classes patients back to state almshouses.

As the latter 19th century saw advancements in both medicine and psychiatry, Blockley’s mission gradually embraced that of a more conventional public hospital. A nursing school was opened at the site 1885 under the direction of Alice Fisher, replacing ad hoc patient nurses with a system of skilled nursing. In 1903, operations of the hospital were turned over to the newly created Bureau of Hospitals in the Philadelphia Department of Public Health. In 1906, the insane were moved to the Byberry Mental Hospital, later known as the Philadelphia State Hospital.

"Old Blockley" was renamed Philadelphia General Hospital (PGH) in 1919. In the next few decades, the original almshouse buildings were gradually replaced with modern facilities. By the 1950’s the site contained the city’s public hospital, as well as a nursing home and a home for the indigent. In 1952, the new City Home Rule Charter placed the control of Philadelphia General Hospital with a Board of Trustees. Under contracts signed in 1959, care at PGH was carried out by the medical schools of Temple University and the University of Pennsylvania who subcontracted work to Jefferson Medical College, Woman's Medical College of Pennsylvania and Hahnemann Medical School. By the early 1970s, public support including Medicaid allowed private hospitals to expand treatment for the poor. Facing both financial difficulties as well as a stock of aging buildings, the board of PGH closed the hospital entirely in 1977.

The Almshouse was built by the city in what was then known as Blockley Township, on land purchased from the Andrew Hamilton estate. This parcel of land stretched from what are now known as Civic Center Blvd to Guardian Drive and from University Ave to 34th Street. A blue historical marker was erected on Curie Blvd, formerly Almshouse Lane. commemorating the significance of the site.

Today the site is occupied by parts of Children's Hospital of Philadelphia, University of Pennsylvania Health System and the Veterans Health Administration and represents a major center of medical research and care in Philadelphia. A long brick wall topped by an ornately decorated iron fence that dates back to Almshouse still forms part of the southern and western boundaries of the site.

The hospital maintained a large potters field on the property adjoining it. This field latter fell into disuse as a cemetery and in later years eventually built over anf forgotten. In 2001, more than 1,000 bodies associated with the Almshouse were recovered from an adjacent construction site and reburied in the nearby Woodlands Cemetery.