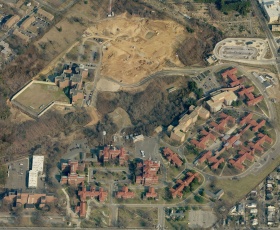 The first appropriation towards building the Government Hospital for the Insane was of $100,000, and was made by Congress in 1852 for the purchase of land. The organic act creating the institution and outlining the duties of its officers and providing for the admission of various classes of insane patients was not approved until March 3, 1855. The hospital, however, had been opened for the reception of patients on January 15,1855.

In November of 1852 a tract of land overlooking the Anacostia River was purchased for $25,000 from Thomas Blagden. Construction began almost immediately on the center building, a red brick fortress designed in Gothic revival style by Thomas U. Walter, who also designed the dome of the Capital Building. The hospital was built following the Kirkbride Plan, most of the construction of the center building was done by slaves.[1] It opened in 1855 as the Government Hospital for the Insane. The Hospital's early mission, as defined by its founder, the leading mental health reformer Dorothea Dix, was to provide the "most humane care and enlightened curative treatment of the insane of the Army, Navy, and District of Columbia." During the Civil War, wounded soldiers treated here were reluctant to admit that they were in an insane asylum, and said they were at St. Elizabeth's, the colonial name of the land where the Hospital is located. Congress officially changed the Hospital's name to St. Elizabeth's in 1916. By the 1940s, the Hospital complex covering an area of over 300 acres. At its peak, 4,000 people worked and 7,000 patients lived there.[2] It was the first and only federal mental facility with a national scope.