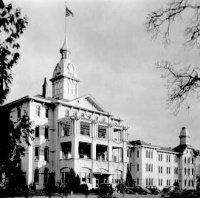 (As early as 1862 Governor Addison Gibbs recommended to the Oregon Legislature the establishment in Salem of an asylum to provide for the care and medical treatment of "insane and idiotic persons". Prior to the passage of any act dealing with the insane, each county had dealt with such unfortunate citizens on an individual basis. A document in the Oregon Archives offers an instance of this bid procedure: dated August 6, 1845, William P. Dougherty of Oregon City awarded a contract for "Boarding, clothing, and keeping" Eli Smith, "a lunatic," to Andrew Hembrie for $1.00 per day. Hembrie was under $600 bond to fulfill the contract. Similar contracts could be found in each of the counties, usually under "Pauper Accounts." Click here for more...