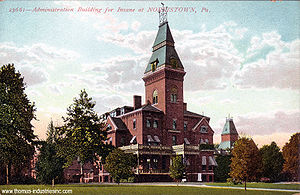 In 1876 Governor John Hartranft formed a commission to study the need for a state-owned hospital in southeastern Pennsylvania. A 200-acre tract in the northern part of Norristown borough was chosen for the hospital and work began on March, 21, 1878. Upon completion on February 17, 1880 there were only two other state-owned hospitals, one in Danville that opened in 1872 and one in Harrisburg that opened in 1851. Plans were underway to construct another at Warren. Norristown was built to alleviate the overcrowding in the psychiatric wards of the Philadelphia Almshouse and other hospitals in southeastern Pennsylvania. In 1880, the hospital was turned over to the Board of Trustees for operation. It operated under the "cottage plan," using small cottage structures to house patients instead of one large facility. During this perriod, the hospital was opened to both sexes and continued to be divided into men's and women's departments until 1923. Serving nearly 3,000 patients, in 1924 the hospital was reorganized under one superintendent. As with most hospitals at the time, there was a farm with animals on the grounds and the patients helped to operate the facility until the 1950s. As of 1998, the hospital still functions as a mental hospital.

From the Pennsylvania Department of Public Welfare web page: The second half of the nineteenth century was witnessing the opening of state hospitals for the care and treatment of persons who had mental illnesses. Prior to this care and treatment had been provided in County Almshouses, which were very, very overcrowded. In May 1876, under Public Law 121, the Pennsylvania Legislature called for the establishment of a state mental hospital to serve the Southeastern District of Pennsylvania.

Norristown State Hospital received its first patient, a woman, on July 12, 1880. Two more women arrived on July 13th followed by the first two men on July 17th. Very soon thereafter groups of individuals were admitted from other state hospitals and county almshouses. By September 30, 1880, there were 295 men and 251 women receiving in-patient care and treatment.

Norristown State Hospital was the first of the Pennsylvania state hospitals to construct its buildings in a style following the "cottage" model, developed in Gheel, Belgium, rather than the large-scale single structure Kirkbride Model that was composed of multiple "wings" attached to it. The Norristown State Hospital buildings were separate structures above ground, but were all inter-connected by a system of tunnels. The "cottage" model allowed for the separation of patients into areas based somewhat on their level of functioning.

There was a tremendous emphasis during the early period on a very humane approach to treatment ("moral therapy") allowing the individual as much liberty as his/her condition would permit. Several wards were unlocked for periods of time. The goal was not to use mechanical restraints (devices that restrict movement). Reports suggest this approach was rather successful. Work assignments became a significant feature of a patient's daily life. Various learning experiences and amusement activities were provided for patients.

The hospital was organized into three sections - men, women, and a business section headed by a steward. Each section was completely independent of the other, with almost completely separate services. The staff of the men's unit was for sometime all men, and the staff of the women's unit all women. A Nursing School was established in 1897. At this time the hospital census had passed 2000.

In 1923 the hospital's Board of Trustees voted to combine under one management with a Medical Superintendent. Dr. Frederick C. Robbins was the first Superintendent under a combined system.

The 1920's and 1930's saw the development of specialized departments such as Social Work, Occupational Therapy, and Psychology. Some years later, Volunteer Resources, Recreation, and Vocational Services were formally established.

The renowned Arthur P. Noyes became Superintendent in 1936 and remained in that position until 1959. Dr. Noyes started the Psychiatric Residency Program which was to be in operation for almost fifty years. He opened the hospital gates and introduced many innovations in treatment and thinking. His book, Modern Clinical Psychiatry, is considered a classic in the field of Psychiatry.

During the 1930's and 1940's electro shock therapy, insulin coma therapy, and lobotomies became methods of treatment. The usage of psychotropic (anti-psychotic) medications began in the early 1950's. Medications were able to help control and lessen the severity of many of the symptoms and behaviors associated with mental illness. At this time there were over 4000 patients.

Specialized treatment units for substance abuse, social rehabilitation, geriatrics, adolescents, forensics, among others, were developed during the latter 1950's and into the 1960's. There was an emphasis on social and vocational rehabilitation to prepare persons for community re-entry.

The late 1960's and early 1970's stressed an emphasis on placement of many patients into the community. The census began to drop significantly. The number of inpatients dropped from about 3200 in February 1968 to slightly over 1700 in May, 1973.

By the early 1970's, each patient had an individualized personal treatment plan and met regularly with a multi-disciplinary treatment team. This concept continues to the present with each patient having a period of treatment and activity participation each day.

In more recent years, Norristown State Hospital has assimilated multiple patients and staff from the closures of other state hospitals so now it is the only remaining state hospital in Southeastern Pennsylvania.