dæmon or daimôn is the formal Latinized version of the Greek term "δαίμων", originally meaning a good of benevolent spirit believed to be found in the natural world. This view of the movements of spirits in the world was the western world's dominant view of mental illness until the rise of formal Greek medicine, through the medical practices of Hippocrates and Galen. 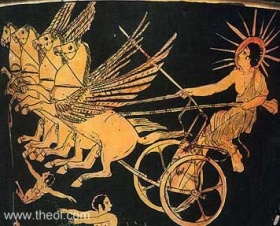 Phaëton transfigured into a daimon

They appear frequently in Hesiod's Theogamy. The character Phaëton becomes an incorporeal daimon through his heroic acts. From Hesiod also, the people of the 'Golden Age' were transformed into daimones by the will of the god Zeus, to benevolently serve mortals as their guardian spirits. The daimon of venerated heroes, were localized by the construction of shrines, so as not to restlessly wander, and were believed to confer protection and good fortune on those offering their respects.

In the Old Testament, evil spirits appear frequently in the book of Judges, as well as in 1st and 2nd Kings. In the Greek translation of the Septuagint, the Greek word 'άγγελος', is employed to translate the Hebrew word 'mal'ak', while ' δαίμων' carries the meaning of a natural spirit that is less than divine, and is used to translate the Hebrew word 'Shed'im', meaning idols, foreign gods, wild beasts, and natural evils. It is the usage of the term daimon in the New Testament's Greek text, that caused the Greek word to be applied to the Judeo-Christian concept of a demon, as an evil spirit by the early 2nd century AD.

Characterizations of the daemon as a dangerous creature, or rather lesser spirit with malicious intents, were developed by Plato, and later by his pupil Xenocrates. This view of possession by a daemon would later be absorbed into the church fathers of Christianity, and the corpus of their writings.

Carl Jung made note of the phenomenon of alleged possession by daemons in a lecture to the Medical Psychological Association in London, in 1935, where he noted that it is a function of the lager psychological theory of Neurosis. He claimed that demonic 'Possession' was a common Endo-psychic function, where the neurotic individual is disconnect from their own sense of ego, and they therefore believe that their body has been invaded by an alien power which controls their volition.