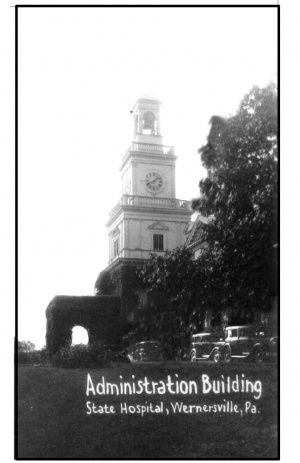 From the Pennsylvania Department of Public Welfare web page: The Pennsylvania General Assembly authorized the creation of the State Asylum for the Chronic Insane on June 22, 1891. The facility was to be a public mental hospital for persons needing extended care. Courts were not permitted to make direct admissions to Wernersville; only patients who had at least one year of care at another state mental hospital were eligible for admission. This special role for Wernersville continued until 1923.

Rankin and Kellogg of Philadelphia designed the new hospital buildings, and the overall appearance of the main Administration/residential buildings was modeled after Independence Hall. The total cost for the plant was $472,603.41. The facility plan was considered advanced for the times, as there were no walls surrounding the grounds nor were there bars on the windows and doors. The patients selected were non-violent, but required long-term care. They could freely move in and out of the buildings. The Pennsylvania Legislature's special commission was very impressed by the "fresh air" and spring waters in this rural setting in Berks County. The adjacent area had long been recognized for its fashionable resorts attracting many summer visitors from Philadelphia and New York.

Between June 29 and July 5, 1893 100 male patients and 30 female patients were transferred by train from other state hospitals to Wernersville. Since the main building was still under construction, the men occupied the grist mill and the females lived temporarily in the Hain cottage. Everyone was expected to work. The men began establishing the farm program and the women used the kitchen in the cottage to prepare meals for the entire group. Among the new patients was a carpenter and a stonemason and their skills were put to use right away. A stone wall for a pond was built; a dormitory was converted from a barn; tables and benches were constructed for use in the dayrooms; a patient blacksmith made tongues and axles for the wagons. By spring of 1894 the farm was in full operation and the main building was nearing completion for occupation later that summer.

Additional dormitories were finished and housed the men and women, with approximately 46 beds in each dormitory. Attendants also occupied private rooms throughout the new buildings. On the hospital grounds , physical changes were continuous almost from the time the initial construction was completed. Many other facilities were added to the complex and they included a full kitchen, dinning room, chapel, infirmary, employees' cafeteria, bake shop, boiler house, laundry, ice plant, filtration plant, and farm buildings. In the late 1890s a small railroad station was built adjacent to the grounds.

The patient population hovered around 800 and 900 through the hospital's first quarter century. By 1935 it had increased to 1,407, and with the closing of mental health wards at many county hospitals in 1942, Wernersville soared past its planned 1,000 capacity with 1,832 patients. By 1970 the census figure was 1,167; the decrease was due to new treatments and intensive community readiness programs conducted by professional therapists. This deinstitutionalization process continued, and by 1975 the population had been reduced again to 832; by 1992 it was 468.

With the ever-improving advances in psychiatric treatment and pharmacology and the concentration on cooperative discharge planning, Wernersville was able to return more patients to the community in this last decade. Today the current hospital census is 266. The hospital currently works very closely with the mental health programs of the following counties: Berks, Lebanon, Lancaster; York/Adams as of 2005; Lehigh and Northampton as of 2010; and the five Philadelphia counties as of 2019. The ultimate goal of the state hospital program is to prepare the consumers for community living.

Open by appointment only. Monday - Friday, 8AM to 4PM. Closed on Holidays and weekends

Located in the Original Administration Building (AKA Building 1)