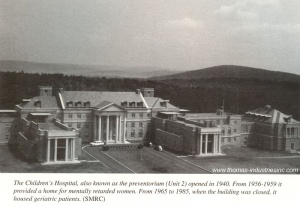 In 1762 the town of Mont Alto was founded, the town was supported mainly by a large blast furnace until it closed in 1893. In 1901 the first state sanatorium was built, White Haven, with Elwell Stockdale as the director. The facilities only consisted of an unheated barn and tents until 1902 when several shacks were built using private donations. Each shack was only 8ft by 10ft and held 5 men each.

In 1903 the state legislature donated $8,000 and the first real buildings of White Pine Camp were erected on the grounds. The state money was used to build an assembly building, office building, spring house, and 6 cottages that consisted of 3 rooms, 2 porches, and furniture for each. The sanatorium housed about 30 patients during this time, who paid $1 per week which covered all expenses except laundry. However, there was still no in-house doctor, only a local doctor that made visits to the sanatorium. The state provided another $15,000 in 1905 to build a dining room and kitchen. By 1907 the sanatorium was transferred to the PA Dept of Health and $600,000 was spent on the facility.

An infirmity was built in 1910 where the Vision Quest building is currently located. The infirmary housed patients that were too sick to live in the camp. The patient census grew quickly to 960 patients in 1912. At this time, most of the patients lived in Dixon Cottages. The Dixon Cottages were 26 square feet and could hold up to 8 patients, 56 cottages were built. Patients often lost contact with family members due to mail from the sanatorium being marked “contaminated” and discarded when received at the local post office. In 1915, South Mountain’s first post office was built where Unit 3 now stands. Mail exiting the sanatorium now received proper handling, when it hadn’t previously, and was marked “disinfected”. In 1918, due to the new post office, the sanatorium's name was changed to South Mountain Sanatorium.

In 1920 a second infirmary was built and by 1924 the first infirmary building was converted to a children's hospital. Over the next few years the campus increased dramatically, and the landscape began to change to resemble more of what we see today. Many more buildings were built including a two story nurses home, power plant, and water treatment plant in 1928. From 1931 to 1933 units 4, 8, 11, and 15 were built. Also during that time period another nurse’s home, new infirmary, new dining hall were built and additions were built onto the preventorium.

Unit 1 was built at a cost of 1.2 million dollars and is still in existence today (2008). The building is 7 stories tall and constructed primarily out of brick, concrete, terrqzine, rubberized tile, and slate. The walls of Unit 1 are 18” thick, and it was the first building on campus to be constructed with concrete floors. The general contractor was John McShain? Inc. Unit 1 featured operating suites, medical & administration offices, kitchen, dinning room, research labs, morgue, autopsy room, two movie theaters, an auditorium, recreation facility, and head sets for each bed that played two radio stations.

Unit 2 was built at a cost of $600,000 dollars and is still in existence today (2008). The building is 4 stories tall and was designed as a preventorium hospital for children. The building was designed by Morgan Keast and features two wings jutting from a central pavilion. Unit 2 also features 2 indoor pools, library, 4 classrooms, an exercise room, single patient rooms, an auditorium, a movie theater, lounges, and a complete single family home for rehabilitation. The first floor of Unit 1 was for boys and nurses and the second floor was for girls. On Thursday June 22, 1939, while construction was almost complete on Unit 2, an explosion ripped through the west wing, completely destroying it.

In the 1950s Unit 1 was used to house the most critical patients. Men were located in the north wing and women were in the south wing. The worse the patients condition the higher the floor they were on. Unit 2 was for the least ill patients and was less constrictive than Unit 1. Patients in Unit 2 were required to get at least 4 ½ hours of sleep and were allowed to sit on the lawn behind the building and could visit the movie theater in Unit 1. During the 50’s patients at the hospital wore pajamas and bathrobes that fell below the knees, men were required to shave once every 2 days, and smoking was discouraged, but allowed if permitted by a doctor. Patients in Unit 1 were allowed 1 week leave every 6 months and Patients in Unit 2 were allowed 2 weeks. Educational classes were required for children ages 6-18 and were voluntary for the adults. At the information desk in Unit 1 patients could buy bus tickets to anywhere in the United States and Mexico. In 1956 Unit 2 was acquired by the Pennsylvania Department of Public Welfare to house mentally retarded women. Unit 2 was returned to the Department of Health in 1960.

In the 1950’s, patients could leave the hospital within months as opposed to years. In 1956 until 1968, the hospital was renamed Dr. Samuel G. Dixon. The Samuel G. Dixon State Hospital retained many of the same rules and regulations of previous years with more critical patients being housed in Unit 1. Despite the amount of daily activity at the sanatorium, signs were visible that it’s time as a tuberculosis facility had passed and in 1963, the sanatorium newsletter ‘Spunk’ produced its final edition. In 1965, the sanatorium became the South Mountain Geriatric Center and in February 1966, the Department of Health announced its intent to phase out tuberculosis treatment at the sanitarium to focus more on geriatric patients being housed in mental hospitals. The sanatorium’s name was changed one final time in 1968 to its current name of South Mountain Restoration Center. After a high patient count of about 1,100 in 1970, the center stabilized to approximately 800 and by the early 1990’s, the patient census dropped to 400. In 1992, a company by the name of Vision Quest opened a camp for troubled youths on the grounds and in October 1994, the Cornell Abraxas Leadership Development Program opened a residential training at the center similar to a military school. This group expanded to Unit 3 once all remaining residents were moved to Unit 1 and in 1997, the Secure Treatment Unit, which houses repeat offender youths, opened behind the Nurse’s Home.