Nebuchadnezzar II was king of the Neo-Babylonian Empire, who reigned from about 605 BC to around 562 BC. He is credited with the construction of the Hanging Gardens of Babylon and for the destruction of the First Temple in Jerusalem. He was renown in the middle east for centuries following his reign for both his brutality as a sovereign, and his late insanity, which developed later in his life. There is little historical information regarding his behaviors, and most of what survives as a record is from those people who he conquered. 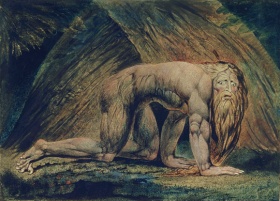 Portrayal of Nebuchadnazzar by William Blake

There are few court records that survive from his reign. The majority of the record that is known about his alleged insanity is from the Hebrew Book of Daniel and the the Jewish historian Flavius Josephus. According to the Hebrew text, Nebuchadnezzar requests the interpretation of his dreams from his courtier, Daniel, who predicts his demise. Shortly thereafter, while boasting about his conquests and prestige, Nebuchadnezzar loses his sanity and lives in the wild like an animal for seven years in the wilderness. After this interregnum, his sanity and position as monarch are restored to him, but only by the grace of God.

There has been some speculation on what the organic cause of this insanity might have been. Some consider it to be an attack of clinical lycanthropy, or alternatively porphyria, particularly considering the reported animal-like behavior attributed to him. Psychologist Henry Gleitman has claimed that Nebuchadnezzar's insanity was a result of general paresis or paralytic Dementia, as seen in advanced cases of syphilis. The church father Origen attributed this metaphysical metamorphosis as a representation of the fall of Lucifer. The African bishop, Tertullian, confined the transformation to the body only, without the loss of individual reason. Cases of this were reported in Italy in the late Roman era by Augustine of Hippo. Some Jewish Rabbis asserted there was an exchange of souls between the man and ox, while others argued for an apparent or docetic change which was not real. The most generally received opinion, which was also held by Jerome, was that the madness experienced by Nebuchadnazzar was from the influence of hypochondriachal monomania.