What's Next For The Vermont State Hospital? 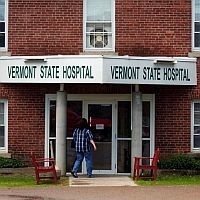 Federal regulators have again denied certification to the Vermont State Hospital. They say the hospital doesn't have a good system for reporting problems and the facility itself has problems like an improperly installed sink, and automatic door closer. We look into why the hospital lost certification, and what it means for the state's budget and the hospital's future. Our guests include Vermont's Mental Health Commissioner Michael Hartman and Representative Anne Donahue. Listen

Also, Susan Cooke Kittredge of Shelburne talks about her late father, BBC commentator Alistair Cooke. Every week for 58 years, Cooke's "Letter From America" was broadcast worldwide on the BBC and his observations shaped the image many foreign listeners had of this country. Kittredge will be speaking Wednesday, April 7, in Montpelier as part of the Vermont Humanities Council's First Wednesday Series.