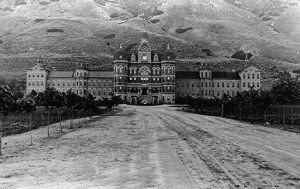 The Utah State Hospital began as the Territorial Insane Asylum in 1885 at Provo, Utah (which at the time was a days' travel from Salt Lake City). The particular site in Provo was some eight blocks from the nearest residence and was separated from the city by swampland and the city dump. The message this reveals about the prevailing attitudes regarding mental illness is unmistakable.

The intervening years, however, have brought many changes: the swamp has been drained, the dump converted into a municipal park, and the city has expanded to the point that there is no longer a stark demarcation of where the "Asylum" begins.

From its origin the purpose of the Hospital was to treat the mentally ill and to return them to a normal level of functioning. In spite of their best efforts, however, in its early days the facility was little more than a human warehouse. In fact, by 1955 the population at the hospital was over 1,500 patients.

Over the years, tremendous advances in psychiatric medicine have changed the role of the Hospital to one of very active (and successful) treatment and rehabilitation. Today, it is truly a Hospital in every sense of the word.

Since l986 the Hospital has received full accreditation from the Joint Commission on Accreditation of Healthcare Organizations, certifying the high quality of the Hospitals environment and treatment programs.

The Utah State Hospital operates under the direction of the Utah State Department of Human Services, Division of Substance Abuse and Mental Health.[1]

On February 6, 1880, by a concurrent resolution of both houses of the Legislature, a committee, consisting of three members of the Council and five members of the House, was appointed for the purpose (inter alia) of taking into consideration the necessity of establishing a territorial asylum for the insane.

On February 7 Councilor Smith introduced a bill " To establish a territorial insane asylum and to provide a fund therefor."

On February 12 the joint committee reported that "It is the unan1mous opinion of this committee that the territory should provide a suitable place for the safekeeping of insane persons, and also to provide for their care and comfort as far as possible."

Councilor Smith's bill to this effect was duly passed and was signed by the Governor on February 20,1880.

At the outset the Board of Directors was appointed by the Legislature and consisted of six persons, three of whom held office for two years and the other three for four years—three of the board to be citizens of the county in which the asylum was situated. The Governor of the territory was always a member of the board, ex-officio.

By Section 1948 the official title of the board was declared to be "The Board of Directors for the Insane Asylum."

Section 1944 directed the board to make a selection of a site for the asylum in one of four counties, viz.: Salt Lake, Utah, Davis or Weber. By this same section the board was directed to decide upon the site solely upon the grounds of healthfulness, adaptability to the purposes of the institution, cost of material for construction and convenience of access from the different portions of the territory. They were empowered to receive by gift, or to contract for and make purchase of such a site.

Section 1947 limited the plans and specifications to a basis of accommodation for not more than 250 patients at any one time. After exhaustive examination and on mature consideration of the various sites offered, the board finally decided upon Provo as being the location which, in their opinion, best fulfilled the conditions proposed by the Legislature.

By Section 3 (constitution of Utah) the site was made permanent. By Section 12 of the enabling act 1000 acres of state land were appropriated and set aside for the establishment and maintenance of an asylum for the insane.

The board appointed John H. Burton as supervising architect. In July, 1881, the plans were prepared, and soon after tenders were called for the erection of one wing. In 1882 the architect visited asylums in Illinois, Indiana, Michigan, Ohio and Western New York.

The plans for the hospital were drawn on the wing system, to be heated with steam by direct radiation. On the death of the original architect the board appointed R. Kletting, his former associate, to fill the vacancy.

By a resolution of the Board of Commissioners " President W. N. Dusenberry and Superintendent Walter R. Pike were authorized to visit various institutions in the East for the purpose of obtaining information for economically perfecting and conducting this institution. The information thus obtained has been of great benefit to this hospital in completing the same. The board gratefully acknowledge the courtesies and kindness extended to President W. N. Dusenberry and Superintendent Walter R- Pike, representing the board in the East, by the following gentlemen: Dr. Mathewson, of the Lincoln, Nebraska, State Asylum; Dr. George C. Palmer, superintendent, Kalamazoo, Mich.; Mr. Brannan, president, Board of Charities, New York; the superintendent of the Government Hospital, Washington; Dr. C. W. Stevens, of the St. Louis Asylum; Dr. Foster Pratt, trustee of the Michigan Asylum; and Dr. H. M. Hurd, of Pontiac Asylum, who also visited Utah and spent considerable time with the board, and to whom they are indebted for valuable information and aid."

The asylum was opened with appropriate exercises on the 15th of July, 1885, and on the 20th of the same month for the admission of patients, with Dr. Walter R. Pike in control as non-resident superintendent.

In 1896, on the admission of the territory to statehood, the new state (by Sec. 14, Art. 8, Con. of Utah) provided that the Board of Insane Asylum Commissioners should consist of the Governor, the State Auditor and the State Treasurer.

In February, 1896, Dr. Walter Pike, who had been superintendent of the asylum since its opening, tendered his resignation to take effect in 60 days, which the board reluctantly accepted, and appointed Dr. Milton H. Hardy his successor, who was succeeded, June 16, 1905, by Dr. D. H. Calder, who is still in the service. The assistant physician is Dr. C. M. Clark.

The name of the institution was changed in 1902 to "State Mental Hospital."

The walls of the main building are built of sandstone and pressed brick. The basement is entirely out of the ground, and is built of stone, 25 inches in thickness. There are seven other courses of stone encircling the building, used as sills, lintels and arches. Above the basement the brick walls are 17 inches thick; main partitions are the same. The main entrance to the building is entirely of stone, consisting of 27 steps. The building is fourstories high, with an attic, a center and two other towers. The total height of the building from grade to eaves is 68 feet; to top of center tower, 132 feet 6 inches. Construction, cornices, tower dormers and finials are galvanized iron; shingle roofs and bodine decks. The building is floored with polished Georgia pine. All walls and ceilings are hard finished; wood work, plain paint, bronze hardware.

The building is thoroughly ventilated and heated with the plenum system, together with direct radiation. The floor space is 30,100 square feet.

The buildings of the patients' department are to the north and south of the administration building. They are four stories high, with tower and cupola on each; the basements of rubble masonry (limestone) ; thickness of wall, 25 inches; walls above the basement of brick, with white stone trimmings; height of wings from grade to eaves, 31 feet 9 inches ; transverse sections from grade to eaves, 43 feet.