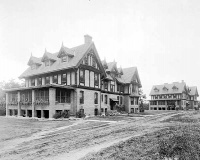 Hastings State Hospital was the first in the state to discontinue use of physical restraints fro mentally ill patients, to implement regional coordination, and to open a regional service for drug dependency. It was also one of the leading hospitals in terms of developing partial hospitalization, adolescent treatment services, and education programs. At its closing, it was also one of the first hospitals to offer benefits for its' workers. All employees were offered employment in the Department of Public Welfare or other state agencies with no loss of salary or benefits. Click here for more...