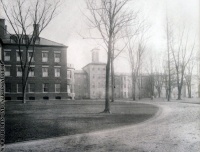 Harrisburg State Hospital is one of the oldest hospitals in the Commonwealth of Pennsylvania. When it was founded it had only one building, the Dorothea Dix Cottage. It served 12 surrounding counties, which had a population of 926,452 in an area of 8,000 square miles. The facility provided over 150 years of service to Pennsylvania's mentally ill, until January of 2006, when it closed.

The Harrisburg State Hospital was created as the Pennsylvania State Lunatic Hospital and Union Asylum for the Insane in 1845 to provide care for mentally ill persons throughout the Commonwealth of Pennsylvania. The hospital was the result of the successful lobbying efforts of 19th century social reformer, Dorothea Dix. A nine member board of trustees was empowered to appoint a superintendent, purchase land, and construct facilities near Harrisburg. This board of trustees received no compensation for their work. In 1848, the name of the hospital was changed to the Pennsylvania State Lunatic Hospital when $50,000 was appropriated to begin construction. Patients from all parts of the state would be accepted at the hospital, at the expense of the counties that they belonged; or, if able they would pay for themselves at a cost of $2.50 per week. This cost included board and medical attention. Click here for more...