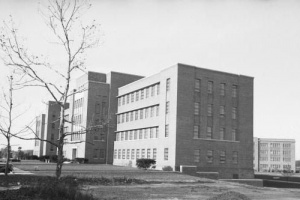 This large complex has its humble beginnings as a small work farm for the mentally challenged in a section of Philadelphia called Byberry, in 1906. Construction for a large asylum complex was in progress from 1910 to the mid-1920s, which included several dormitories, an infirmary, kitchens, laundry, administration, and two coal power plants. Many buildings were built with scrap and other materials because of the World War I shortage, which resulted in quick deterioration of many of the structures in the complex.

The Philadelphia Hospital for Mental Diseases opened its doors to its first patient in 1907. Its population quickly grew, but with this also came tales of abuse and neglect. With insufficient funds, the asylum had quickly fallen into disrepair, and patients wound up sleeping in hallways, and raw sewage was found on the bathroom floors during an inspection of the facility.

In 1936, the institution was finally signed over to the state, although it did nothing to alleviate the problems in the facility until the early 1940s. This is when the new owners of the institution sought to change the old Byberry into the new "Philadelphia State Hospital," and the facility underwent an enormous expansion at the rate of one building each year until 1953. Still, articles such as Albert Deutch's 1948 publication "Shame of the States," articles such as Life's "Bedlam 1946" and Times' "Herded Like Cattle" (1948) described life inside the hospital as despicable.

By the 1960s, Philadelphia State Hospital consisted of over 50 buildings, 7,000 patients and 800 staff members, along with a deep financial annual cost. In the 1970s, the large staff buildings began to empty out as the workers would much rather commute than live on the grounds. De-institutionalization soon took its hold on this hospital, and most of it was evacuated throughout the 1980s. Horrid living conditions were publicized after a thorough investigation once again, including inadequate treatment, mismanagement, and patient abuse such as sexual exploitation and starvation. The hospital was ordered to close, and it's last patients left in June of 1990.

Shortly after closing, Byberry was stripped from top to bottom, by looters and salvagers looking for free copper that could fetch a good price elsewhere. It was slated for demolition in 1991, but deconstruction was halted when large amounts of asbestos were found inside. At an estimated $16 million asbestos removal price tag (without demolition), the buildings have been left to rot away since. With lax private security patrolling acres and acres of land, and a multitude of horror stories surrounding this place, Byberry became a popular hangout for many people. Almost everything that could be broken is smashed to bits, anything flammable is now ashes, and graffiti is painted over so many miles of yellow tile that it doesn't resemble much of an asylum anymore. Luckily, this fireproof tile prevents most of the fires from spreading out of control and razing the entire complex to the ground. Guys wandering around with chainsaws, kids shooting flare guns at security from the roofs, and massive BBQs and parties featuring DJs are just a few of the crazy stories you'll hear from "The 'Berry".

In March of 2006, the Westrum Development Corporation purchased the 106 acre Byberry site. Pressured from Somerton residents as well as the city to end the "Byberry problem", Westrum moved quickly. By June 7th there was a chain link fence surrounding the property. A week later, truckloads of trees and other natural growth clinging to the buildings like a friend, was removed and discarded. The C buildings, for the first time in 25 years, stood boldly, displaying their long gone pride. At a long, staring look, one could see how they once formed a complex of buildings. On Wednesday, June 14th 2006, a celebration of sorts was held in front of C-7. The celebration was the long overdue ending and renovation of this "eyesore". The ceremony consisted of knocking over the overgrown Philadelphia State Hospital sign. In attendence were Governor Rendell, Mayor Street, J. Westrum (CEO), and J. Sweeny, CEO of Brandywine Realty Trust, the developers of the new buildings to be built on site. [1] [2]

This is an old bata tape video found in the hospital of the staff discussing various patients.