Since 1839 the City of New York had been operating an asylum on Blackwell's Island for the care of the city's insane. At the time the vast majority of the insane under municipal care were poor immigrants, which at the time were pouring into New York City. As a result the population of the Blackwell's Island Asylum had steadily risen and was maintained in a perpetual state of overcrowding, providing only custodial care. To combat the rising population the asylum built a three story building for violent patients and later expanded to a three story building, formerly a workshop for the neighboring workhouse. Finally a series of one story pavilions were built however by 1868 the asylum only had accommodation for 640 of the 1035 patients under their care. The lack of room for expansion on Blackwell's Island, already hosting the city Asylum, Prison, Almshouses, and Workhouse, caused the city to look elsewhere. Nearby Ward's Island had been owned by the Department of Emmigration since 1847 and was already home to other city institutions. As a result a site was picked and the new branch of the asylum was established in 1868, opening to patient on December 12, 1871.

In 1871 when the new branch of the New York City Insane Asylum opened Ward's Island already was home to the Verplank State Emigrant Hospital, on the north eastern side, as well was the New York City Inebriate Asylum on the Southwestern part of the island, just below the new Insane Asylum. The new hospital building was built constructed of brick and Ohio free-state in the English Gothic Style with a Mansard roof. It was built in the Kirkbride style, with a three story central building with wings staggered back en echelon on either side. The cost of this structure was $700,000, and its overall frontage was 475 feet, with accommodation for 500 patients.

Upon opening the Ward's Island Asylum became the Male Department of the New York City Insane Asylum system, and it operated independently from the original Asylum, now the Female Department, on Blackwell's Island. Immediately all male patients were shipped up river to this new building. Regrettably this new hospital was no real improvement and suffered from many defects. The eating and lighting proved to be inadequate, the furniture was crude and many patients did not even have eating utensils to use at meal time. The nurse to patient ratio was one to 30 while the physicians proved inexperienced, only serving at the Asylum until they had enough experience to move on. Attendants proved similarly inadequate, as did treatment of patients, with many being locked in their rooms. The patients often were mingled with no regard to disease annd with no treatment. On top of this it was almost immediately the hospital found itself again overcrowded and looking for more space.

In 1875 the Wards Island Asylum transferred some patients to the former Inebriate Asylum, which had recently closed. However that same year the Ward's Island Homeopathic Hospital, which in 1894 would move to the Asylum buildings on Blackwell's island, took control of the building. In 1877 patients were sent to an unoccupied three story building, know as the "annex", formerly used by the Emigration Department to house immigrants. The building, having only open barracks style bays on each floor proved less than ideal for care of the insane. In 1880 some patients were transferred to the Hart Island Asylum, a new branch which moved into Civil War era barracks formerly occupied by an industrial school. Their age and nature made them completely unsuitable for habitation by the mentally ill but they were forced to endure the conditions for several years.

Finally in 1878 Superintendent MacDonald requested a new wing to the original building, providing room for an additional 250 patients. For the sake of time and expedience a second ward on the other wing was also set to be built. Immediately patients and convicts from the work house set to work on the new additions to alleviate the overcrowding. Also under MacDonald there was a marked improvement in hospital management, food, and general welfare. He worked to not only ensure a better diet for the patients but also replaced the sub standard and uncomfortable furniture and increased the funding for patient amusement. In 1879 four lectures on insanity were given at the hospital to the student physicians, with crowd ranging from 20 to over 200 at each. These were the first lectures of their kind given at a New York Insane Hospital. By 1880 Dr. MacDonald succeeded in finally getting rid of the practice of using convicts in hospitals, arguing it brought an atmosphere of crime and depravity which held the hospitals progress back. In this year manual restraints were also abolished at the hospital. 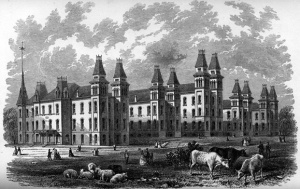 Despite the dedication and commitment of Superintendent MacDonald to improve and administer the hospital as well as possible the ever increasing population led ever worsening conditions. In 1886 allegations of poor food and attendants were made and an investigation found the claims credible. As a result appropriations were increased and plans made for construction of more buildings. Attendants buildings were built on Wards Island as well as Hart's and Blackwell's. Improvement's included a sea bath which was cut into the rock on the southern end of the island to allow the waters of Hell gate to flow into it. A plunge bath was also built in the West wing of the kirkbride. The hospital at this time included carpenters and painters shops, a shoe shop, brush shot, a tailor, a printing office, and others. All work was done by the patients, with a requirement for release from the hospital being proficiency in one of these trades, to better serve the patients search for employment. A new dietary was enacted and buildings were begun on a newly purchased 1000 acre tract of land at Central Islip on Long Island. This new Farm Colony would later become Central Islip State Hospital.

By 1892 the Ward's Island asylum had maintained its integrity as the male department of the hospital, holding 2,498 male patients, almost 300 over capacity. However, this same year considerations were made regarding the transfer of female patients to the recently abandoned State Emigrant Hospital complex, vacant since the new Federal Emigration Station at Ellis Island opened earlier in the year.

During this year with the 2,500 female patients at Blackwell's Island, and the roughly 100 on Hart's the city asylum cared for around 6,000 people.

In 1894 all properties of the city asylums on Hart's, Ward's, and Blackwell's Islands, were leased to the state of New York from the city. The agreement was that the state would have use of these leased properties for a period of 15 years, after which time control of the properties would be turned back over to the City of New York. During this time it was agreed upon that the state would provide for increased accommodation for patients and evacuate the institutions on Hart's and Blackwell's Island within five years, and evacuate the Ward's Island institution by the end of the 15 year term. This three Asylum Complex was now called "Manhattan State Hospital".

In this same year a majority of the female patients from the Blackwell's Island Asylum were transferred to former Emigrant Hospital buildings, and the building used by the New York City Homeopathic Hospital, which in turn moved into the former asylum buildings on Blackwell's. Transfers to Ward's Island continued and by 1898 only 839 patients remained on facilities on Blackwell's.

In 1899 all patients from Hart's Island were transferred either to Ward's Island or the new facilities at Central Islip. The Hart's Island Asylum was closed at this time.

By 1898 the Wards Island Asylum had a population of 2,031 male and 1,468 female patients, with most of the females coming from Blackwell's. The total population of the asylum by 1899 was 4,393, making it the largest institution in the world at the time.

By February 1901 with Hart's Island's closure two years prior and the transfer of the last of the patients on Blackwell's Island to Central Islip the Ward's Island Asylum, divided into two departments, East and West, was all that remained under State control. In 1905 these two departments were merged by the state into Manhattan State Hospital, while the colony at Central Islip, formerly a department of this hospital, was separated into an independent entity. In 1907 it was suggested the lease on the Ward's Island properties be extended and in 1908 a fifty year lease was signed between New York City and New York State, with the agreement that the state would erect new hospital facilities on a modern plan. The Hospital continued to grow, reaching its peak population of 7,000 in 1926.

In February 1923 a fire at the hospital claimed the lives of 25 patients.

In 1934 Robert Moses took over as head of the NYC parks department and tri-boro bridge authority. His goal was a long unrealized plan of a bridge linking Brooklyn, Queens, and Manhattan, and Ward's and Randall's Island were vital to this plan. Furthermore he envisioned both Islands as a vast complex of parks and public space, even planning for a large stadium. While he did get his goal realized in many ways, with the House of Refuge and most other institutions being demolished in by 1937 he ran into problems when the Manhattan State Hospital refused to leave. Though still housed in 19th century buildings and a state law mandating its closure by 1943 it prevailed and continued to operate due to overcrowding at the other state institutions.

In 1954 voters approved a $350 million bond for construction of new buildings, which were built on the site of the former Emigrant Refuge and Hospital. Ths new complex consisted of 3 large metropolitan plan buildings, however new facilities did not end the hospitals troubles. The 1960's and 70's brought many problems. Rapes and robberies occured at the hands of criminals who came onto campus due to poor security and in 1974 the Times reported recently transferred retarded patients were left in rooms idly while equipment for their development went unused because of under staffing and poor management. Shortly afterwards the Mayor of NYC accused the hospital of being unsanitary, keeping poor records, and distributing drugs carelessly. 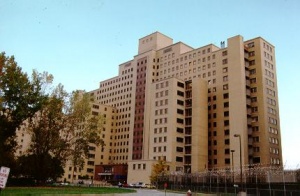 Also in the late 1970s the Mayor opened a "temporary" homeless shelter for 200 men, which was the cause of much debate and controversy. After turning it over to a private organization (Volunteers of America) it grew to 500 residents by 1981. By 1990, with accusations of the residents stealing, exposing themselves to children, and other criminal acts the VOA were forced to greatly increase the security at the Shelter. Today it provides a home to 600 men.

In 1979 the Manhattan State Hospital was re-consolidated into its current Manhattan Psychiatric Center. In 1985 one of the buildings was separated from the Manhattan State Hospital to become the Kirby Forensic Psychiatric Center, for violent and criminally insane patients. Today it bills itself as a modern hospital providing top notch care to its patients. The in-patient population in 1995 stood at 900 patients and as of 2010 only 260 are housed in the hospital. The hospital also has 90 patients living in transitional housing on the campus as well as over 600 regular outpatients.