The Cottage Plan (also known as the colony plan in England) is a style of asylum planning that gained popularity at the very end of the 19th century and continued to be very popular well into the 20th century. Prior to the cottage plan, most institutions were built using the Kirkbride Plan which housed all patients and administration into one large building. It was found that the Kirkbride Plan lacked the proper facilities for noisy and violent patients. Cottage Plan institutions usually consisted of a multitude of individual buildings that housed a specific patient type. The buildings were normally two stories tall or less and were often connected to each other with a series of tunnels that were either half or fully submerged underground. Cottage Plan institutions would often be segregated by sex as well as patient type. For example there would be two individual buildings for convalescent patients, one for men and one for women. The two buildings would usually be located on opposite sides of the hospital complex. An administration building would typically be near the front and center of the complex and communal buildings, like a chapel, kitchen, gymnasium, or auditorium were often in the center. 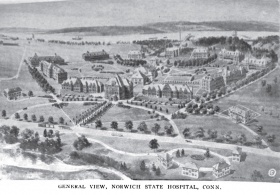