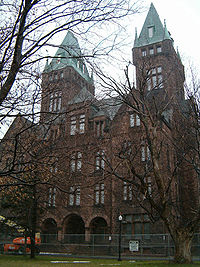 The complex is internationally regarded as one of architecture’s great treasures. In 1973 it was added to the State and National Registers of Historic Places, and in 1986 it was registered as a National Historic Landmark – one of only seven such sites in Western New York - and is listed on the National Trust’s list of twelve nationwide "sites to save" and the Preservation League’s statewide list of seven "sites to save." Source