The planning for a state hospital for the mentally ill in Alabama began in 1852. The new facility was planned from the start to utilize the "moral architecture" concepts of 1830s activists Thomas Kirkbride and Dorothea Dix. Architect Samuel Sloan designed the imposing Italianate building after Kirkbride's model plan. The construction was an important source of employment in Reconstruction-era Tuscaloosa. The facility was added to the National Register of Historic Places in 1977.

Dix's reformist ideas, in particular, are credited as the driving force behind the construction of the "Alabama Insane Hospital," which was later renamed for its first superintendent, Peter Bryce, a 27-year-old psychiatric pioneer from South Carolina. His tenure was marked by absolute discipline among the staff of the hospital. He demanded that patients be given courtesy, kindness and respect at all times. The use of shackles, straitjackets and other restraints was discouraged, and finally abandoned altogether in 1882. Various work programs and other activities were encouraged, including farming, sewing, maintenance and crafts. Between 1872 and the early 1880s, some of the patients wrote and edited their own newspaper, called The Meteor. These writings provide a rare inside look at life in a progressive mental institution in the late 19th century. At that time, Bryce's management and commitment to "scientific treatments" was recognized around the country as in a class of its own. 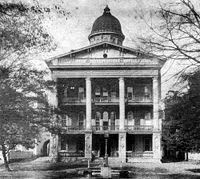 During the 20th century, however, the patient population expanded while standards of care fell to abysmal levels. Alabama Governor Lurleen Wallace was appalled after viewing the facility in February 1967, and earnestly lobbied her husband, George Wallace (who held the actual power of her governorship) for more funds for the institution.

In 1970, Alabama ranked last among U.S. states in funding for mental health. Bryce Hospital at that time had 5,200 patients living in conditions that a Montgomery Advertiser editor likened to a concentration camp. That same year, a cigarette tax earmarked for mental health treatment was cut. 100 Bryce employees were laid off, including 20 professional staff. Members of the Department of Psychology at the University of Alabama attempted to file suit on behalf of the fired workers, but Federal Judge Frank M. Johnson ruled that the courts had no standing to intervene on behalf of fired employees. He left open, however, the possibility of a suit filed on behalf of patients, whose quality of care was not affected. [1]

1852: Alabama Insane Hospital established by the Alabama Legislature on a 326-acre tract adjacent to the University of Alabama.

1860: Peter Bryce, 26, elected first superintendent. During his tenure, Bryce abolishes straitjackets and restraints and insists on treating patients with dignity and respect.

1861: The immense hospital, built on the model developed by Thomas Kirkbride and Samuel Sloan, opens. It features running water, flush toilets, gas lighting and is the first building in Tuscaloosa to have gas lights and central steam heat.

1865: From the hospital's dome, observers watch Union troops burn the University of Alabama.

1900: The state Legislature renames the hospital for Bryce, who died in 1892.

1949: A report finds the state's two mental hospitals, Bryce and Searcy near Mobile, have an average daily patient population of 5,732 with 10 full-time staff physicians, the largest patient load of any state in the nation at the time.

1970: A class-action lawsuit in federal court, Wyatt vs. Stickney, alleges that persons involuntarily committed to Bryce were not being treated. At the time, Alabama is 50th out of the 50 states in spending for the care of people with mental illness or mental retardation in public institutions, allotting 50 cents per day per patient.

1995: U.S. District Court Judge Myron Thompson releases several mental health facilities from supervision under the Wyatt case and finds the department in compliance with about a third of the mental illness and mental retardation standards.

1996: The Mary Starke Harper Center on the Bryce campus opens as the first psychiatric facility in the country designed specifically for geriatric patients.