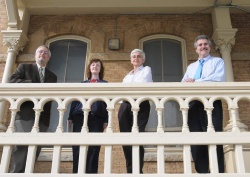 WESTBORO — A van will pull away from the Daniels Building at Westboro State Hospital tomorrow, taking four patients to Worcester State Hospital, and it will be the first time since 1886 that there are no adults there.

When $625,000 in renovations are completed at Worcester State Hospital in June, 30 adolescents being treated at Westboro State Hospital also will be transferred there. And that will be the last that the 61 buildings on more than 600 acres off Lyman Street will see psychiatric patients from the state Department of Mental Health.

It leaves mixed feelings — but decidedly more bitter than sweet — among the staff and advocates for what started out as the Westborough Insane Hospital. “Westboro is gorgeous,” said Jennifer C. Garry, a nursing supervisor who is among the 180 Westboro State Hospital employees who will work at Worcester State Hospital. 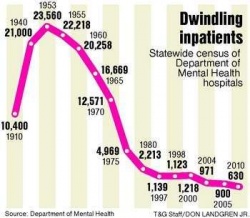 “It has Lake Chauncy. It has trails/roads down by the lake. There's a beach just for the patients.

“It's just a beautiful walking area,” she said of the campus where she has worked for 22 years. Westboro advocates failed to persuade the DMH Inpatient Facility Feasibility Commission in 2005 to locate the new hospital here instead of in Worcester.

Ms. Garry knows that a lot of people are angry, not the least of whom are the 124 hospital employees who were laid off (32 of them involuntarily, and the rest of whom took incentives for voluntary layoff. Out of 462 full-time equivalent employees, about 265 were transferred to other DMH facilities and 73 retired.)

“But,” Ms. Garry said, “I feel like fiscally the state had to make some changes. It's unfortunate it affected so many people — staff and patients. The quality of care was excellent.”

The Department of Mental Health has worked feverishly to place the 152 patients who were treated here. Most of them — 81 —have found placements in the community, in keeping with the “Community First” policy of the Patrick administration. The other 71 have been transferred to other Department of Mental Health hospitals, according to DMH Area Director Theodore E. Kirousis. 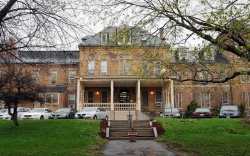 But as operations wind down, “It's like a ghost town. We walk the halls and it echoes,” Ms. Garry said.

Not surprising for a hospital down to four patients, when it had 2,100 patients in 1950, according to Kristina N. Allen, a former selectman and past president of the Westboro Historical Society. She wrote a town history in 1984, “On The Beaten Path: Westborough, Massachusetts.” 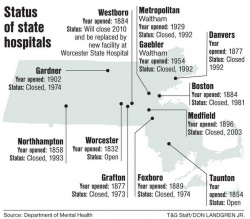 It's been a long but predictable road since the introduction of psychotropic drugs such as Thorazine in the 1950s and the opening of community treatment two decades later that permitted large numbers of psychiatric patients to live outside of hospitals. Thorazine was among the first antipsychotic drugs developed. The DMH hospitals have reduced their census by more than 97 percent of their peak of 23,560 patients in 1953, to fewer than 630 today.

But it's that last little twist of the knife that has some people crying foul. The disaster that is the Massachusetts state revenue picture prompted a reduction in the Department of Mental Health budget from $685 million last year, to Gov. Deval L. Patrick's proposed $621 million next year.

With inpatient care costing nearly five times more than community care, Westboro State's $43 million budget was too tempting to wait for the new hospital in Worcester to open before closing Westboro, as had been planned.

The National Alliance on Mental Illness of Massachusetts supported building the new hospital in Worcester and is “not necessarily opposed to closing” Westboro State Hospital, according to policy director Toby Fisher. But he said that “with drastic budget cuts, the community is grossly inadequately funded” to care for more patients. 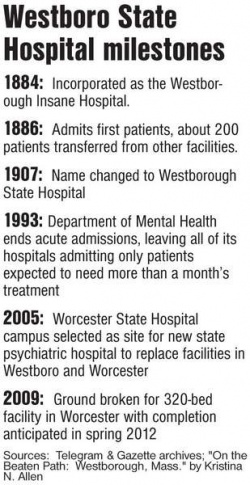 But Mr. Kirousis, the director of DMH's Metro Suburban area, defends the job done by his staff and that of all the other DMH areas that also discharged patients into community care. It was done by taking $15 million of the patient-deflated Westboro State Hospital budget to increase community funding, he said.

He is particularly proud they were able to find community placements for 53 percent of the Westboro State patients, exceeding even the rate — just under 50 percent — achieved when Medfield State Hospital was closed in 2003, which he also oversaw, but had far more time to plan for.

Those were planned so well that only 14 out of 122 Medfield patients placed in the community had to return to a DMH hospital, according to Barbara L. Fenby, Metro Suburban area director of community services.

But Larry DeAngelo of Marlboro, NAMI Massachusetts affiliate liaison, is less enthusiastic. He said a NAMI member complained to him that her brother has been moved from Westboro State to a nursing home.

Mr. Kirousis said four Westboro State patients were placed in nursing homes, which count as community placements. They were placed there because their medical conditions require daily skilled nursing, he said. 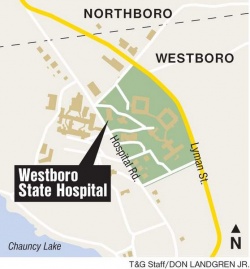 Ms. Fenby said the guardians of all four of those patients “said this is what they wanted.” Daniel R. Lambert, Westboro State director of psychology, said that the hospital human rights officer and patient advocates checked with families and the patients' treatment teams to ensure that needs were being met and “98 percent of the time there was concordance.”

Service Employees International Union Local 509 and the National Alliance on Mental Illness expressed concern in January 2009 when 100 DMH case managers were laid off, leaving 350 case managers. Now there are 120 fewer than that, according to DMH spokeswoman Anna Chinappi.Mr. Kirousis said the department's community-based flexible support system, begun last July, is designed to have nonprofit human service vendors pick up the slack, but Local 509 says it lacks accountability and consumer choice.

He also said that it's not the state budget but the dedication of hospital staff — even if they are not happy with the hospital's fate — that is making the patient transfers work. Janet E. Ross, Westboro State nursing director, said that staff members have gone to a former patient's new community placement for up to four full shifts to show the community program staff how to make the patient feel at ease.

With some of the patients having been in Westboro State 28 years, Ms. Fenby said, “That's what makes these placements doable. Otherwise these people never ever would have gotten out of here.”