From Asylum Projects
(Redirected from The Eastern Pennsylvania State Institution for the Feeble minded and Epileptic)
Jump to: navigation, search 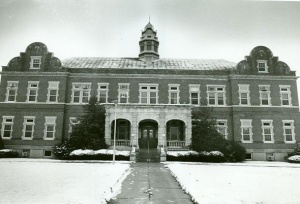 The Eastern Pennsylvania State Institution for the Feebleminded and Epileptic was founded by legislative acts of May 15, 1903. Primarily designed as a training school for the feebleminded, it became, through change in the legislative act, a custodial institution as well. Consequently two distinct sections are maintained: one for such epileptic and feeble-minded as require custodial care, and the second for the training of feeble-minded children.

The buildings are erected on a modification of the cottage plan, grouped closely together and connected by corridors. They are two stories in height, of brick and terra cotta, with granite trimmings, and fireproof throughout. They are so arranged as to provide a large number of small rooms occupied by from two to three beds, a few small dormitories with from eight to ten beds, and a large day exercising room.

The patients were fed in a general dining room, with the exception of the "low grades" who were housed in a separate building. Initially, a large percentage of patients were admitted voluntarily. Up to March, 1912, no female patients were being received.[1]

From 1903 to 1908 the first buildings were constructed on 633.913 acres of Crab Hill in Spring City, Pennsylvania on what was referred to as the lower campus. Out of the first few buildings constructed, 'F' was the Girl's Dining Room, 'G' was the Kitchen and Store Room, 'H', 'I' and 'K' were a Cottage for Girls, 'N' was the Boys' Dining Room, 'P' was the Teachers Home, 'Q', T', 'U' and 'V' were a Cottage for Boys, 'R' was a School, 'W' was Laundry and Sewing, and 'X' was the Power House. 'P' was used as a temporary Administration building until the institution's opening in 1918 along with the opening of ‘L’ and ‘M’ in 1919. In 1921, Whitman and Wilson I and II were constructed along with Penn Hall for employee housing; in 1929, the Assembly building was complete and functioned as the gymnasium and auditorium. The buildings on lower campus are currently labeled with letters such as 'F', 'I', 'K', 'P', 'Q', 'R', 'N', 'U', 'V', 'T', 'W' and 'X' with names later assigned in the 1960's. In 1930, the first buildings on the upper campus, otherwise known as the Female Colony, were completed and named Pershing, Buchanan, Audubon and Keystone. Capitol Hall was erected after World War II along with Devon constructed on lower campus. Horizon Hall opened later in 1971.[2]

The patients would be separated by their intelligence level in different buildings; some could almost function on their own, and others could not feed or bathe themselves. The most severely stricken patients would lie in cribs all day, barely able to move or roll over. The constant attention needed for the patients was a very difficult task to begin with, but when overcrowding became apparent, the care and living conditions became appalling.

A class-action case was filed against Pennhurst State School on behalf of its patients. The case was heard by U.S. District Judge Raymond J. Broderick, who in 1977 ruled that the conditions at the institution violated patients' constitutional rights. Pennhurst State School was ultimately closed in 1987. Its 460 patients were discharged or transferred to other facilities in a process known as deinstitutionalization that lasted several years, and included discussion of treatment plans with each patient's family.[3]

After many years of determining what to do with Pennhurst, congressman Jim Gerlach sought to establish a federal veterans cemetery at Pennhurst in 2003 but the VA rejected the proposal.

In 2005, the state adopted the Keystone Principles concerning the state's duties to maintain historic property and to consult with the Pennsylvania Historical and Museum Commission before transferring the property into private hands. Local County officials supervisors approved a private development and Pennhurst was sold to a developer, Pennhurst Associates, for two million dollars. The Pennhurst Memorial and Preservation Alliance (PMPA) was formed to advocate for certain uses of the site.

Pennhurst was added to the National Register of Historic Places and Pennsylvania's list of the most At-Risk Pennsylvania Properties as well as the International Coalition of Sites of Conscience, a worldwide network of historic sites specifically dedicated to remembering struggles for justice.

In partnership with the Preservation Alliance of Greater Philadelphia, PMPA obtained a grant to complete a re-use design and feasibility study of the Pennhurst campus.

As of 2010, Penn Organic Recycling LLC currently operates on four-and-a-half-acres of Pennhurst, offering tipping, composting and food waste services. The Department of Environmental Protection permitted the composting operation at Pennhurst to maintain no more than 25 tons.

In 2010 an organization established a "haunted attraction" in the former administration building. The attraction is called "Pennhurst Asylum" and as of Jan 2012 has run a seasonal "haunted asylum attraction" for the last two years. The group has been criticized by preservationists for the damage they have done to the former hospital, such as moving the morgue coolers into the administration building. They also continue perpetuate a bad stigma that is seen by many people about state hospitals.

As of December 2020, only the main building seems to be used for the above mentioned "haunted attraction", the other remaining buildings appear to be in various states of Disrepair.